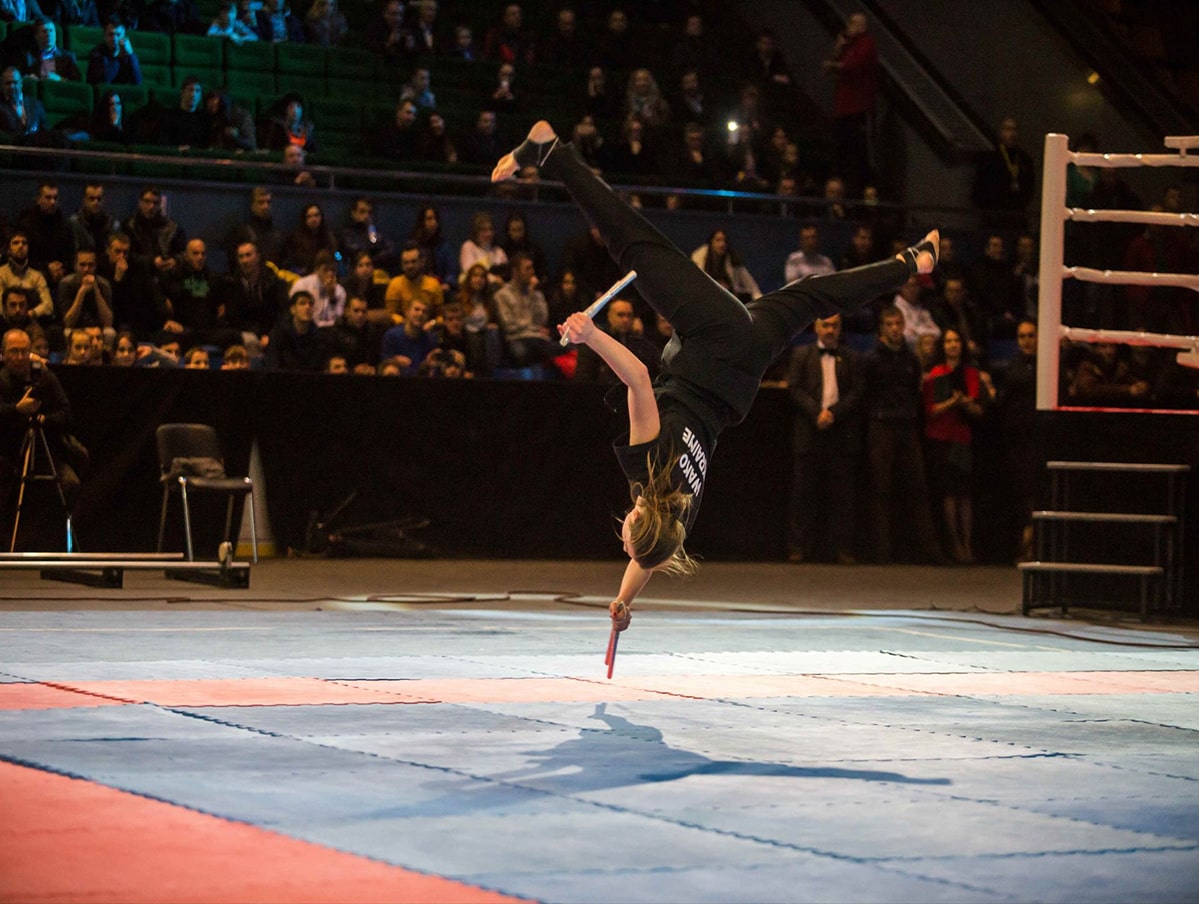 A musical form is a sort of imaginary fight against one or more opponents in which the performer uses techniques coming from Oriental Martial Arts to specifically chosen music. The choice of music is personal

CDs / IPod / Smart Phones: All Competitors must have 1 track / File on their CDs / IPod / Smart Phones for Open Hand / Weapons, Competitors must have their Name, Country, Open hand, Or Weapons on their CDs, If a competitor’s music stops unintentionally during their form the competitor can continue without music Or they can restart their performance again, There will be NO penalty or minus points awarded in these circumstances’

For musical forms competition the allowed age groups are:

Age divisions will be determined in the following manner at All WAKO Championships: A competitor will be placed in an age division according to his / hers Date of Birth. Age Categories specifications:

However a junior who has competed as a Senior in world or continental championship can continue to compete as a junior in all other international events, excluding the above.

From the day they turn 19 years and up to the day before he turns 41 or she turns 36. Specification during Championships / Tournaments: In case of birthday during a tournament that changes the age category, they can compete in the lower category until the tournament is over. A tournament period is defined as from the day of the official weigh-in / registration and until the finals are finished.

Positive proof of age will be required at all championships (Passport or Government ID or driving license) is required.

In WAKO Continental / European and World championships, it is only possible to start and compete in ONE age class, you can only compete in an age class, A maximum of one division above your actual age,

World Cups / Opens: Competitors can move between categories / age classes (Maximum one above) as long as it is a division above
their age only in other Wako tournaments.

Art. 7 DIVISIONS
In Musical Forms competitions there are four divisions both for men and women:

In Wako Continental / World championships 2 competitors can represent their country in the same categories / divisions
In all other Wako tournaments there are no limits to how many competitors from each Country / Club can Enter / Compete,
Competitors must choose from Hard or Soft Forms, (i.e. Hard - Open Hand + Hard Weapons, Or Soft - Open Hand + Soft
Weapons) Competitors cannot enter 1 Soft and 1 Hard Category,

Art. 8 UNIFORMS
There is no specific uniform for musical forms competitors; They can wear any kind of legally recognized Kickboxing, Karate or
Wushu uniform, which must be clean and decent. (T Shirts will NOT ALLOWED)
In Hard styles, competitors must be bare footed, while in Soft Styles they can wear martial arts shoes,
Competitors are allowed to wear sweat bands on arms / wrist,
Competitors are not allowed to wear any jewellery or piercings of any kind

Art. 10 GYMNASTIC MOVEMENTS
Both in Hard or Soft styles, no more than Five (5) Gymnastics movements are allowed in WAKO musical forms,
Violation of this rule will lead to a 0.5 point deduction from each judge for each extra gymnastic technique performed,
A gymnastic movement is a movement with no martial art purpose (No striking), Some gymnastic movements can be modified by
adding a kick / kicks to the movement. In that case, it is not considered a gymnastic movement.
Please Note these are classed as Gymnastic techniques: Forward roll / Backward roll, Hand Stands, All cartwheels including two
(2) handed / One (1) handed , Elbow cartwheels, All round offs including 2 handed ,1 handed , Elbow round offs, Hand springs /
Head springs (Soft Forms NO) / Back Flips with hands touching the floor (Even if the legs are Split or Not) Kip ups in Hard style are
classed as Gymnastic techniques, But in Soft forms they are not, Front and Back somersaults, Tucked / Straight or Piked,
Back somersaults with Full (1) Twist / Double (2) Twists, Arabian Front somersaults,
Please Note: ( Hand down Raize!! / Websters / Capoeira Kicks are classed as Tricks),

Art. 11 CRITERIA OF JUDGING IN ORDER
Judges will sit apart at least 1 Meter away from each other, No Talking will be allowed only to discuss with the Chief Referee
All musical forms Judges must have knowledge and understanding of Tricks, Gymnastics, Weapon, Weapon releases and weapon
body rolls, Each judge must take into consideration, before awarding any decisions, The Criteria below:
Basics: Stances, Punches, Kicks and Blocks according to the basic technique of the original styles
Balance: Strength, Focus (Perfect balance and movements done with energy)
Degree of difficulty: Kicks, Jumping kicks, Spinning kicks, Tricks, Combinations, Gymnastic movements
Synchronization: In Hard styles, Perfect timing, the relationship between movement and music;
In Soft styles, The relationship between movement and music,
Manipulation of Weapons: With regard to weapons. The competitor must show perfect control with blocks, strikes and mastery of
the weapon being used by doing outstanding work with their weapon/s, This WILL be the first criteria to be considered in the
weapons division, Competitors who do Tricks, Gymnastic Movements within their performance, Will be judge on the
manipulation of the weapon first, Then the tricks and Gymnastics movements,
Please note: This is a weapons form not an Open hand form with weapon/s

Starting the form with Weapons on the Floor:
Competitors are allowed to start with their weapon/s on the floor, BUT once they have picked the weapon/s up they cannot put them
back on the floor again, If the competitor places their weapon/s on the floor it will be counted as dropping the weapon and a full 1.0
will be deducted, If it is placed on the floor a 2nd time, Then the competitor will be Disqualified
Showmanship: Competitor's presence and role playing, and the presentation of choreography, The competitor may touch the floor
with their weapon when performing gymnastics, and tricks, But the weapon/s must be kept in their hand/s,
Competitors can Spin / Roll the weapon/s around their body (Neck / Arms and Hands) These are not counted as a releases!
Only Five (5) complete releases allowed …i.e. throwing the weapon/s in the air is allowed, More than five (5) releases, the
competitor will be disqualified), Weapons that are rolled around another weapon such as Kama, Swords, Bo’s, Sai’s, etc will not be
counted as releases if the weapon is caught back in the hand whilst still in contact with the other weapon,
When 2 weapons are used in the form:
Both weapons should be brought in by the competitor during the presentation.
They can be the same kind of weapons or 2 different kinds of hard or soft style weapons, pending the category,
The weapons must reflect on the category: ie if competing in Hard style the weapons must be of hard style origin,
You may place one weapon on the floor (Tatami) during / after the presentation, But before the form starts,
You may pick up the second weapon at any time during the form, but once you have picked it up you have to finish the form holding
both weapons in the hand/s,
Please Note: Alternatively, We will allow changing weapon during the form as long as it has been presented as part of the
presentation, Meaning: Allowing to place the first weapon on the floor and without any breaks or stops, Pick up and continue the
form with the second weapon,
Please Note: you cannot change back to the original weapon you started with,
The following are not considered “Dropping you Weapon”
Placing a weapon on the floor (Tatami) during / after the presentation, but before you start the form
Picking up a second weapon during the form as long as it has been bought in and presented during the presentation
Dropping your weapon is considered loosing control of your weapon during the manipulation IF it falls on the floor / Throw your
weapon on the floor, Or if you place your weapon on the floor in any other way or situation other than described above.
If a competitor’s weapon/s breaks or falls apart, they will receive the lowest score (Minimum Marks of 7.0)
They cannot carry on performing their form with the broken weapon,

Art. 12 SCORING
After a musical forms performance 4 judges and 1 chief referee will score the performance as follows:
Boys / Girls, Younger / Older Cadets / Juniors / Seniors: From 7.0 to 10.0 in all Wako tournaments including Continental and
World Championships
Please Note: In World / Continental Championships there will be 4 Judges and 1 Chief Referee.
At the end of each performance, the judges make up their decisions according to the established criteria, The Chief referee will advise
the judges how many points to deduct if there were any Illegal techniques or violation of the rules, After the competitor has finish
their performance, at the command of the chief referee, they will raise their score boards, visible to the competitors and the audience,
and keep them in the air until announcer in office has counted all marks, Highest and lowest marks will be deducted,
The three remaining marks will make the final score.
In case of a draw for first, second or third place (All 5 scores are compared and the highest scores are highlighted)
The competitor with the most highlighted scores wins, If there is still a draw both competitors will compete again

Art. 13. TATAMI SIZE
The area for musical forms performances will be 10 x 10 square meters,
There will be no tables / chairs or objects within 1 meter of the tatami,
No one will be permitted to stand behind the judging panel, No one will be allowed to interfere with the scoring table,
Competitors who step OFF the Tatami during their performance will be deducted 0.5, ONLY if the tatami is 10 x 10 meters’
If the Tatami is smaller than 10 x 10 meters then no deductions will be awarded for stepping out of the area,

Art. 15. SEEDING
Competitors will be seeded, i.e. 1st, 2nd and 3rd place only from the previous World or European Championships. However,
Continental / European champions cannot be seeded in the World Championships. If any of the top three are not present at the above
Championships they lose their ranking.
The placing for competitors who are not seeded will have their names / order ed by the following method:
Names of all un-seeded competitors will be written down. Numbered balls / discs will be picked out of a bag and the first number
ed will be written at the side of the first name on the list, and so on until all competitors have a number
This will then be the order for the competition.

Art. 16. DANCE MOVEMENTS
Dance movements will not be allowed accepted or tolerated during musical forms performances. Competitors who choose to
incorporate dance moves such as "Break, Jazz, Body Popping, Or even "Classical" Dancing will receive the lowest mark 7.0 from
each judge

Art. 17 COSTUMES & MAKE-UP
Theatrical costumes, including make-up, masks or any type of uniform that is not recognized as a legal Martial Arts uniform
Will Not be accepted, Infractions to the above-mentioned rule will lead to the immediate disqualification of the competitor.
Competitors are not allowed to cover their eyes (Blind folded) with bands during their performance

Any special effects, Such as lasers, Smoke, Fire, Explosions, Water etc. will not be tolerated. Infractions to the above mentioned rule
Will lead to the immediate disqualification of the competitor